Spirit of the Elder

Ever since I was a young boy I have been facinated with the mystical and spiritual aspect of the Indian Chief and the Shamans. The respect and leadership these wise people received from their tribes was hardly ever challenged.

Although I am mainly known for my landscape paintings I felt compelled to paint an Indian Chief that portrays the symbolic respect that I have for Native American Chiefs in a bold and passionate painting. I tried to portray the Chief in such a way that he could be considered to be from any tribe so that all Native Americans could relate to him.

The painting is very colorful and large at 48"x36". 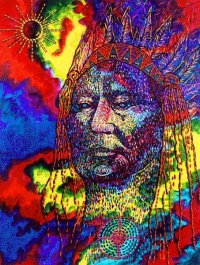